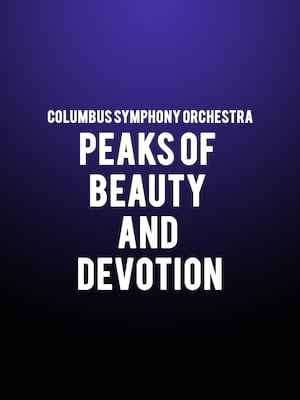 Awakening is a substantial and compelling work. Skillfully varied with an attractive vein of lyricism, the composer maintains interest throughout the concerto's contrasted sections.

Why See Columbus Symphony Orchestra - Peaks of Beauty and Devotion?

The Columbus Symphony and its fearless music director Rossen Milanov welcome American cello virtuoso Joshua Roman to the Ohio Theatre stage for a rousing duo of exquisite and emotional works. Roman begins the program with a performance of his very own Cello Concerto entitled Awakening. This is followed by the brass chorale beauty of Bruckner's Symphony No. 7, an exultant and life-affirming work that came to be his best known.

At the age of 22, Roman was appointed the principal cellist of the Seattle Symphony, becoming the youngest principal player in the symphony's history. In 2007, he resigned to pursue a solo career that not only saw him perform across the world with leading orchestras but the creation of his own compositions. His dexterity, technical prowess, and emotive playing single him out as one of the younger generation's most promising instrumentalists.

Sound good to you? Share this page on social media and let your friends know about Columbus Symphony Orchestra - Peaks of Beauty and Devotion at Ohio Theater.