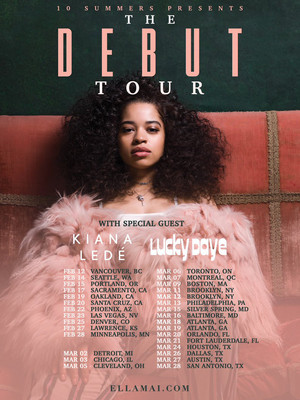 ...the eruption of "Boo'd Up" may be a sign that things are shifting in R&B for up-and-coming female acts, who have rarely enjoyed the same commercial success as their male counterparts in the last decade.

The London Songstress Tearing Up US Charts

Proving that televised talent competitions like X-Factor aren't the final bastion of pop music gatekeeping, feisty London-based singer songwriter Ella Mai may not have advanced beyond the TV show's 2016 season initial auditions, but she stuck to her guns and released a solo EP on Soundcloud independently that same year. Her determination paid off and she signed with American producer DJ Mustard, breaking into the mainstream with Billboard Hot 100 Top Five track 'Boo'd Up' in early 2018.

With influences like Mariah Carey, Alicia Keys, Destiny's Child and Lauryn Hill, Mai captures the soulful balladry and lovelorn anthems of classic 90s R&B, updating it with her own unique urban style. Having already supported the likes of Kehlani on tour, as well as collaborated with Ty Dollar Sign, the fledgeling songstress is hitting US shores on her first American headline tour, a sign of exciting things to come.

Sound good to you? Share this page on social media and let your friends know about Ella Mai at EXPRESS LIVE!.