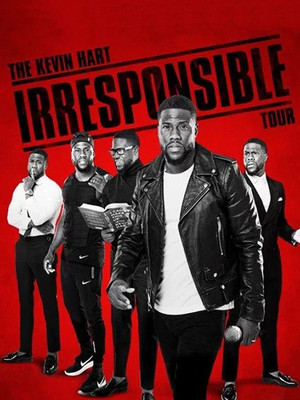 Kevin Hart is America's biggest (in popularity, not stature) comedian. His humor isn't for kids, this guy can seriously curse for America. A lot of his material is drawn from his personal experiences with family, friends and loved ones, and his trademark catchphrase "All right, all right, all right" is a staple uttered by his fans across the country.

Citing Chris Tucker and DL Hughley as influences, he has established a firm fanbase amongst African-Americans as well as continuing to draw wider audiences through his various television projects and movies. Don't miss Hart as his Irresponsible Tour continues in 2018!

Kevin Hart is a Philly-born former shoe salesman who has become one of the funniest actor/comedians around. With an absent father who was in and out of jail for much of his childhood (now reconciled), Kevin learned to use humor to shield his difficult experiences growing up. He has appeared in various tv and films including The 40-Year-Old Virgin, Along Came Polly, Get Hard and recent box office hit Central Intelligence.

This show is not suitable for younger audience members

I read some previous reviews and thought we had wasted our money...I... more

Kay : “Best Show I have ever seen. Easily one of the best nights”

Kevin Hart's Irresponsible tour was hands down worth the money and I would... more

Sound good to you? Share this page on social media and let your friends know about Kevin Hart at Nationwide Arena.