Sorry! You missed Animals As Leaders at Newport Music Hall 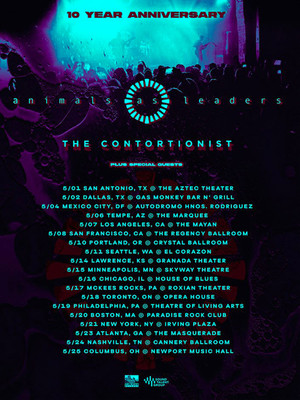 The technical aspects were mind blowing to say the least from all 3 members but was coupled with a great atmosphere from both backing tracks and their own melodies layered on top.

Why See Animals As Leaders?

Guitarists Tosin Abasi and Javier Reyes and drummer Matt Garstka make up the distinctive band that is Animals As Leaders. Their name alone represents the band's individual approach to producing and performing metal music and has seen them release four studio albums with the latest being brought out 3 years ago.

The band are known for producing their own style that fuses experimental metal, modern jazz, alternative, and world music genres and ever since their self-titled debut in 2009 have been making waves in the underground music scene.

The group's latest album 'The Madness of Many' was released in 2016 and reviewed as "a dense and triumphant brand of instrumental metal that can be dazzling or exhausting, depending on your mood" by Pitchfork.

Seen Animals As Leaders? Loved it? Hated it?

Sound good to you? Share this page on social media and let your friends know about Animals As Leaders at Newport Music Hall.