Sorry! You missed Columbus Symphony Orchestra - The Rite of Spring at Ohio Theater 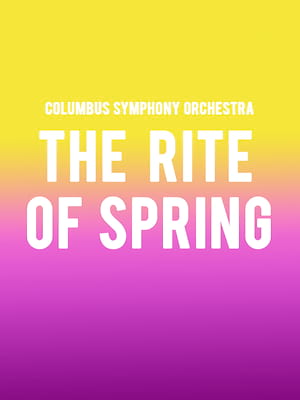 I haven't understood a bar of music in my life, but I have felt it.

Why See Columbus Symphony Orchestra - The Rite of Spring?

Despite or perhaps because of its less than auspicious premiere, no Orchestra's yearly programming is complete without a recital of Stravinsky's riotous masterpiece, a promise The Columbus Symphony Orchestra deliver on in spring 2020. Conducted by Rossen Milanov and featuring Bag Piper Cristina Pato, enjoy the revolutionary piece that brims with pagan rhythms and boisterous spirit.

Alongside, the evening will see a performance of Chicago Symphony Composer in Residence Missy Mazzoli's Sinfonia and Vazquez' Widows of the Living and of The Dead.

The Riot of Spring

A radical evocation of Russian folk-culture and ancient traditions, it is one of the most recorded works from the 20th-century repertoire. As inspiring as it was inciting in 1913, it is a distinct turning point in composition history, and one not to be missed by intermediate or beginner symphony-goers.

On the evening of May 29, 1913, shocked by the avant-garde nature of the work, the audience of The Theatre des Champs-Elysees had no qualms in loudly voicing their disapproval of the daring new production scored by Stravinsky for the Ballet Ruses. Afterward, the ballet itself took longer to gain popularity, but when isolated, the score gained traction almost immediately in the concert halls of Europe, ensuring its survival.

Sound good to you? Share this page on social media and let your friends know about Columbus Symphony Orchestra - The Rite of Spring at Ohio Theater.