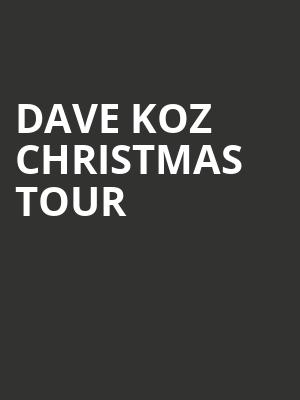 Photo by freestocks on Unsplash

A smooth blend of jazz with an upbeat personality, Koz knows how to hit all the right notes!

Celebrate Christmas in style with smooth jazz aficionado Dave Koz ! Although he's Jewish, Koz loves the festive season and all the trimmings that come with it, so much so that he released a Yuletide album entitled "The 25th Of December" in 2014. The classy compilation features contemporary covers of classics and carols like The First Noel and Let It Snow!

The saxophonist rose to prominence as a session musician in the late 80s before pursuing a solo career in 1990. Since then his released an astounding 17 studio albums and garnered many accolades including a Grammy nomination. An exuberant and skilled performer, why not join Koz & friends as he spreads the Christmas cheer?

You may be required to wear a mask during this performance. Please contact the venue directly for more information.

I didnt know what to expect and I was BLOWN AWAY by the talent, pure... more

Diane Peck: “Not as good as prior shows”

We have attended at least 10 Dave Koz Christmas tour shows and this one... more

Sound good to you? Share this page on social media and let your friends know about Dave Koz Christmas Tour at Palace Theater.